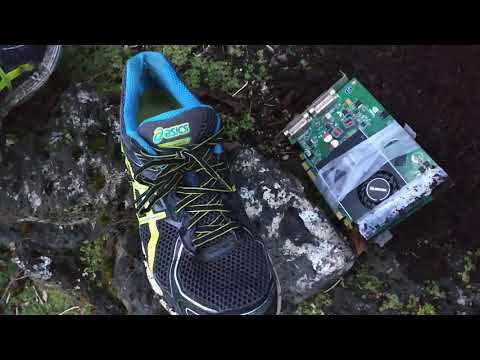 TL:DR: Don't bother mining if you want to get rich yo. You're way too late to the party.
Welcome to the exciting and often stressful world of bitcoin! You are wondering what looks like a once in a lifetime opportunity to get rich quick. Of course you guys probably heard about this "mining" process but what is this?
Simply put, a bitcoin mining machine that performs complicated calculations and when deemed correct by the network, receives a block which contains 25 bitcoins (XBT). This is how bitcoins are generated. So your brain instantly thinks, "Holy shit, how can I get on this gold rush?"
Before you proceed further, I would like to explain the concept of mining further. Bitcoin is limited 21m in circulation. It is coded to release a certain number of blocks at a certain time frame, ie: this year the network will release close to 500,000 bitcoins. What this means is that the more people (or specifically the amount of mining power) mine, the less each person gets. The network tries to keep to this time frame through the process of difficulty adjustments which makes the calculations harder and this happens every 2 weeks. So every 2 weeks, you get less bitcoins with the same hash rate (mining power) based on what the difficulty changes are. Recently, the changes have been pretty staggering, jumping 226% in 2 months. You can see the difficulty changes here.
Now, why are these changes so large?
A bit of a simple history. Bitcoin's algorithm runs on SHA-256. This algorithm can be solved using many hardware, from CPU to GPU and dedicated hardware (Application Specific Integrated Circuits). When bitcoin first started, mining on CPU was a trivial process, you can pretty much earn 50 XBT (the block size then) every few hours between Q1 and Q2 of 2010.
In late 2010, due to the difficulty increase that is reducing the effectiveness of CPU mining, people started to harness GPU mining. Only AMD GPU's architecture design are better optimized for bitcoin mining so this is what the community used. Immediate improvements of more than 10x was not uncommon.
In time of course, GPUs reached their limit and people started to build dedicated. In the same vein as the CPU to GPU transition, similar performance increase was common. These ASICs can only perform SHA-256 calculation so they can be highly optimized. Their performance mainly depends on the die size of the chips exactly like CPU chips.
In general, think of bitcoin mining's technological advancement no different to mining gold. Gold panning (CPUs) vs pickaxes (GPUs) vs machinery (ASICs) and we are still in the ASIC mining race.
ASIC mining started with ASICMiner and Avalon being first to the market, both producing 130nm and 110nm chips. The technology are antiquated in comparison to CPUs and GPUs which are now 22nm with 14nm slated for Q1 next year by Intel but they are cheap to manufacture and with performance gains similar to the CPU to GPU transition, they were highly successful and popular for early adopters. At that point in time since there were less competing manufacturers and the low batch runs of their products, miners became really rich due to the slow increase in difficulty.
The good days came to an end mid August with an unprecedented 35% increase in difficulty. This is due to existing manufacturers selling more hardware and many other players coming onto the market with better hardware (smaller die). Since die shrinking knowledge and manufacturing process are well known along with a large technological gap (110nm vs 22nm), you get an arms race. Current ASIC makers are closing in on our technological limit and until everyone catches up, the difficulty jumps will be high because it is just too easy to get a performance increase. Most newer products run at 28nm and most chips are not well optimized, so it will be around another 6 to 9 months before we see hit a hard plateau with 22nm or 14nm chips. The estimated time frame is because manufacturing chips at 22nm or 14nm is a more difficult and expensive task. In the meantime most manufacturers will probably settle at 28nm and we will reach a soft plateau in about 3 months.
Now, you might ask these questions and should have them answered and if you have not thought about them at all, then you probably should not touch bitcoin until you understand cause you are highly unprepared and probably lose lots of money.


No. If you have to ask, please do not touch bitcoin yet. You will spend more on electricity cost than mining any substantial bitcoin. Seriously. At all. A 7990 would produce a pitiful 0.02879 XBT (USD $14 @ $500/XBT exchange rate) for the next 30 days starting 23 Nov 2013 at 35% difficulty increase.
And if you think you can mine on your laptop either on a CPU or GPU, you are probably going to melt it before you even get 0.01 XBT.

Probably not because you probably forgot that GPUs and CPUs produce a ton of heat and noise. You can try but I see no point earning < $20 bucks per month.

No, because your machine will probably not mine as much as buying bitcoins. This situation is called the opportunity cost. While you can still make money if XBT rise in value, it is a fallacy.


The only circumstances where you will earn money is when XBT exchange rates is so high that it makes the opportunity cost pales in comparison. Unfortunately this is not the case. If XBT stabilized at 900/XBT today (20 Nov 2013) then we might have a good case.
The risk is just generally not worth it. Unless you have at least a hundred thousand and can make a contract with a manufacturer for a lower cost, do not bother. Just wait until the arms race is over then you can start mining.

Okay, go buy an AsicMiner USB Block Erupter. They are cheap and pretty fun to have.

Sure, just read the answer below on who NOT to go for. You are doing bitcoin a service by securing the network and you have our (the users') gratitude.

You can check out the manufacturers and their products below along with a calculator here.
If you still insist on buying, do not to go for BFL. Their track record is horrid and borderline scammish. KnC fucked up a lot with defective boards and chips. Personally, I think CoinTerra is the best choice.
Alternatively, you can go on the secondary market to buy a delivered product. You can get a better deal there if you know how to do your "return on investment (ROI)" calculation. Personally, I will go for a 45%-50% difficulty increase for the next 3 months for my calculations and a 2% pool fee.
However, most products on ebay are sold at a cost much higher than it should. bitcointalk.org is a cheaper place because everyone knows what are the true value is so you will find less options. If you are unclear or need assistance, please post a question.

I actually do not use any of the pools recommended to the left because I think they lack features.
My favourite is Bitminter (Variable fees based on features used; max 2%). It has all advanced features for a pool, very responsive and helpful owner on IRC. Variable fees is good for those who do not need a large feature set, even with all features turned on, it is still cheap.
Eligius (0% fees) has high value for money but lacks features. It has anonymous mining which might be attractive to certain subset of people but not for others. Many other community member and I disagree highly with the opinions of the owner on the direction of bitcoin. I do use his pool for now but I do so only because I share my miners with a few partners and anonymous mining allows us to monitor the machines without using an account. Bitminter uses only OpenID which is problematic for me.
BTC Guild (3% fees) is another big pool and is fully featured and does charge a premium for their fees. That said, they are the most stable of the lot. I do use them but do so only because my hoster uses them for monitoring. I try not to use them because a pool with a very large hash rate (they are the largest) presents a large vulnerability to bitcoin's network if compromised.
All of them pay out transaction fees.

submitted by Coz131 to BitcoinMining [link] [comments]

Hobby Bitcoin mining can still be fun and even profitable if you have cheap electricity and get the best and most efficient Bitcoin mining hardware. Bitcoin mining is competitive. It’s not ideal for the average person to mine since China’s cheap electricity has allowed it to dominate the mining market. If you want bitcoins then you are better off buying bitcoins. Bitcoin Mining Hardware ... Most popular bitcoin mining hardware comparison. AntMiner S7; AntMiner S7 has been released in 2015 and now it is known as one of the most popular mining devices on the market. The reason for AntMiner’s popularity is that it offers an incredibly high hashrate for a reasonable amount of power it consumes. S7 has 135 of 28nm BM1385 ASIC chips spread across three boards and cooled by two fans ... Hardware Page /> Ant Miner S9. Since from the start, Bitcoin's Difficulty has recorded a very few and much of the time consecutive month to month increases , especially from late November 2015. It moved from 520,569,941 GH/s to the present record high of 1,426,731,353 GH/s, which infers Difficulty has nearly tripled starting now and into the foreseeable future. Gh 28nm Asic Bitcoin Miner Btc. main No Comments. Most recently, Canaan Creative presented the miner Avalon 741 – its new ASIC for mining Bitcoin. The successor to the 721st model was to become a direct competitor to S9 from Bitmain. It is quite noisy and requires lots of electricity, but at the same time very productive. ASIC was not lost among competitors even six months later. The Bitcoin ... What is an ASIC Bitcoin Miner? Since it’s now impossible to profitably mine Bitcoin with your computer, you’ll need specialized hardware called ASICs. Here’s what an ASIC miner looks like up close: The Dragonmint 16T miner. Originally, Bitcoin’s creator intended for Bitcoin to be mined on CPUs (your laptop or desktop computer). However, Bitcoin miners discovered they could get more ...

Dash is awesome, but mining is getting harder though Join Hashflare and start mining Bitcoin, Dash, and Ethereum https://hashflare.io/r/4B0EA9A Get 3% off on Genesis Mining - nBiS6j Buy Bitcoin ... World's first 28nm Bitcoin Mining ASIC. Worlds'a fastest 28nm concept to silicon ever. How to BitCoin mine using fast ASIC mining hardware - Duration: 27:15. ... ASIC Comparison - Duration: 14:54. The Crypto Lark 12,954 views. 14:54. BITCOIN BULL BREAKOUT! Crypto Can't Be Stopped ... 722 GH/s - HashFast's Golden Nonce has met it's match! See our GN 28nm ASIC on the new Yoli Evo Mining Board!!! If you are interested in cloud mining, please help by clicking this link: http://bit.ly/Iyf6bM - It's an interesting and very easy alternative to hardware-ba...